BULLDOZED!    We're getting bulldozed, without our knowledge or consent.

We know there's more going on that what we find in our newspapers. 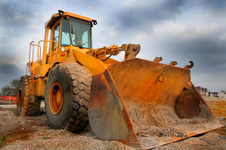 Local governments are busy changing regulations and running up debt without sharing much about what they're up to.  Most folks don't know what's happened till it's too late to yell "Stop!"   We feel like we've been bulldozed, because it's true.   We have been.

We're loading this page with information about regulations and spending you've probably never heard of.  And we'll expose projects that obviously aren't meant to pay for themselves.   See the Dredge for much-much more!

Although there are no more than a handful of electric cars, we learned that in on April 22, 2009 our "dreamy" Washington State legislature passed a law requiring charging station infrastructure - charging stations - must be installed throughout the state.   The governor has been imposing directives as well.  Always "moved by the spirit," Bellingham has begun churning out new zoning regulations to dictate where such charging stations may and not be built.   Can you imagine why these would need to be forbidden in residential areas?    Reckless plugging-in would present some problem?   Guess so.   We can only imagine that Whatcom County Planning & Development is slaving away, working on this too.    To learn more, check out the story (and definitely the comments) at the this WE Dredge post.

Most people have never heard of the Whatcom County "CEDS list."   That's the "Comprehensive Economic Development Strategy" ('wish list') for the whole county, including our cities.   In 2010 the list totalled $620,504,298.  It included four pages of projects with no price-tag at all.  See the current December 7, 2010 list here.

This project list is 'staked out' every two years to officially establish "public need," so that federal and state grants can be applied for.  Would local citizens be willing to spend $620+ million for most of this if we had to pull out our checkbooks and pay the bill ourselves?  Look at the "funding sources."  That column includes direct taxes and fees (shown on the right hand side of each page) plus "state" and "federal."  The list isn't prioritized in any way we could find.  Next time you hear a story about about the state or national debt, remember this list.

2013 UPDATE    WE learned through a story at the Herald in December 2012, that a convoluted re-arrangement of special interests occurred; that a non-profit agency was "merging" with the Council of Governments to steer county "economic development investment" decisions.  What qualifies these people (zilch) to meddle in the local economy? WE do not know, but the first joint task will be updating the CEDS list.  Why should the public know what they do, or have any say in its future?  The "big guys" will oversee this for us.

2016 UPDATE  They're still at it.  In April 2016 Whatcom County Council council resolved again to support the CEDS list that now totals $640,360,000.  Of that, one hundred three million is for county jail work and sheriff's office (on the peg).  There are any number of outrageous items here, like $2 million for PUD #1 to meddle in "broadband" and cell service in the foothills when the private sector (Comcast and Frontier) already serve the entire east county.

Until July 26 2010, anyone in the county could use 25% of their property to engage in a home occupation without asking for "permission."   That all changed on July 27, 2010.   You very well may be breaking the new ordinance without knowing it.  Better check out the new limitations and provisions.   If you have a home business and a 3-phase electrical service, that's not permitted.   If you have shop equipment over 5 hp, that's not permitted either.  You can't be paid to repair cars or do bodywork in your home garage anymore - that's definitely out.  You can't have a lighted sign, and it had better not be very big.  The amount of space you can use inside your house and on your property is more limited than before.   And you'd better count how many vehicles you've got parked on your land and know their GVW (gross vehicle weights) -- you just might be breaking the law.  Read the new home occupation ordinance here to find out if you're a miscreant!   The fines can be huge - see below.  Was any part of this really necessary?

ALERT:  Zoning Infraction Penalties Increased in 2009:  Did you know a zoning infraction to put a person IN JAIL for up to a year?   Nuts.

Fines and penalties for Whatcom County "zoning infractions" have gone up, did you know?  They can be as much as $1,000 per day, and in some cases up to a year in jail.  The Planning Department initiated these changes in 2009, and none of this got much attention in the press or anywhere else.  The Planning Department's staff report at the time (you can find it here) explains that "The interests of the community outweigh a single individual’s property rights."   That staff report offers interesting illumination on this department's view of the public.   Wouldn't want citizens getting away with who know's what on their own land.   After all, this indisputedly is their county to command and control, plan and penalize.  Council passed the new penalty text unanimously December 8, 2009; read the whole new ordinance here.

UPDATE:   Now, in 2016, each new DAY of an infraction may begin the clock ticking on a NEW infraction.   Nasty.